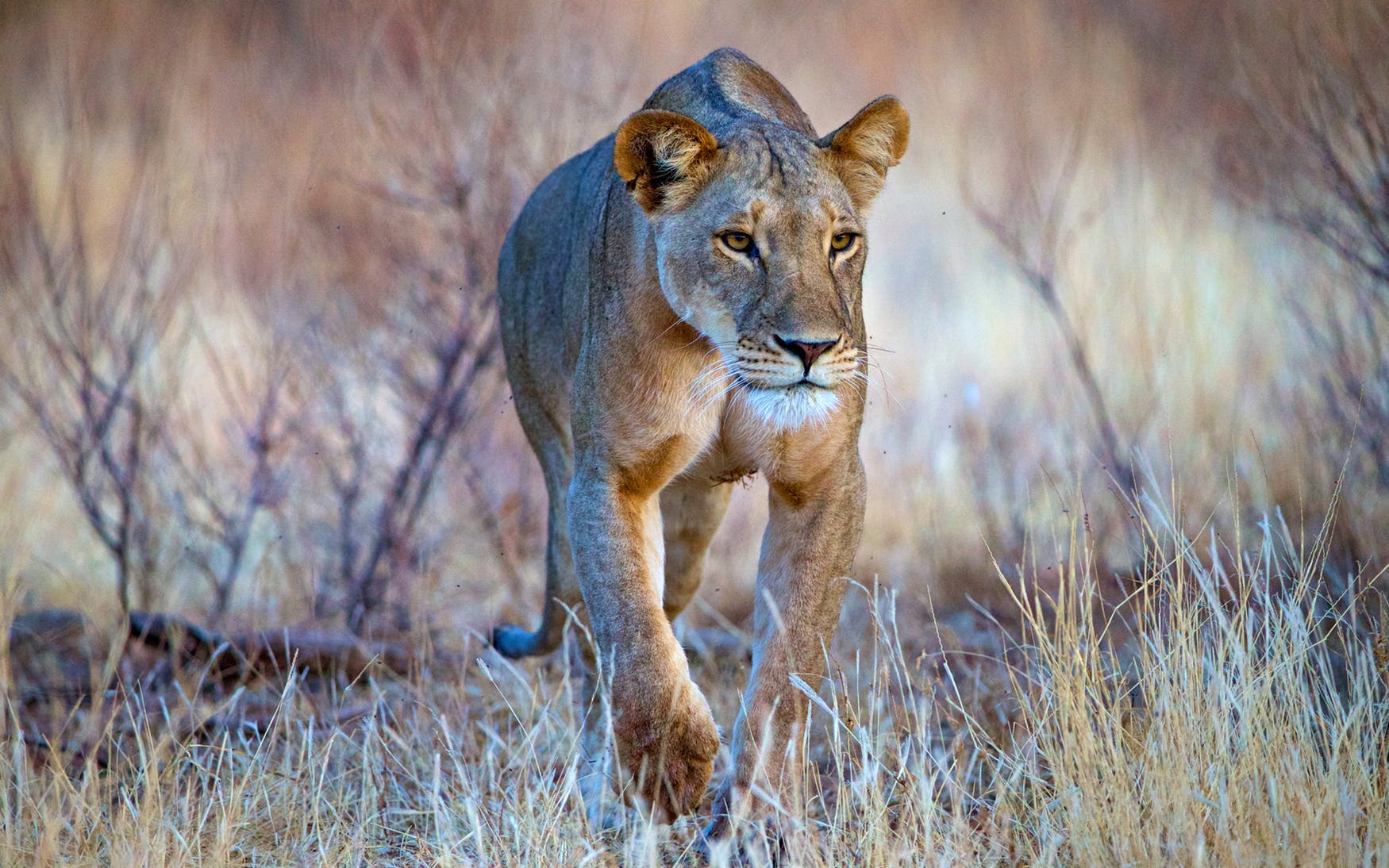 Africa’s lion population has declined by approximately half during the last 25 years. Though the picture varies from country to country, in a number of places around the continent we are starting to see notable conservation successes for lions. There is strong political will for conservation in Africa—many African governments are making conservation a priority—and there are already vast areas of land set aside for wildlife throughout Africa. In fact, Africa has the potential to have three to four times the number of lions it currently has. Additionally, lions are a resilient species and with sufficient investment to protect them, their prey, and their habitats, they can recover quickly in numbers. There is no doubt that the species can be saved. We just need to raise the funding needed to provide the protection needed.

The Lion Recovery Fund (LRF)—launched last year by the Wildlife Conservation Network and Leonardo DiCaprio Foundation in response to this rapid, severe decline—proudly funds a wide range of organizations in their efforts to conserve lions and prevent these beautiful cats from becoming extinct. As of today, the LRF has invested $3.2 million to 36 projects with 25 different organizations across 17 countries, for the benefit of lion conservation. These organizations confront a variety of complicated issues that affect lions across the continent, including shrinking habitats and the loss of wild prey, human-lion conflict, and the burgeoning trade in lion body parts.

We have invested in lion conservation in a wide range of scenarios, following our science-based strategy:

Rescue – we have invested in lion conservation in a number of countries where lions are at risk of going extinct. For example, we have now provided support to three of the four remaining populations of Critically Endangered West African lions, as well as provided support for the reintroduction of lions in Malawi.

Recover – we have supported a number of projects in sites with significant potential for recovery of lion numbers. For example, we helped to activate new conservation projects in protected areas with huge potential for lions in both Mozambique and Zambia (with the latter likely to receive follow up support for reintroductions of key prey species, as a prelude to restoring lions).

Retain – we have invested in some of the sites containing Africa’s largest remaining lion populations. For example, we supported the establishment of a de-snaring team in the Serengeti, and invested in human-lion conflict mitigation on the edges of the Okavango Delta to help keep connectivity pathways with Namibia and Angola open for lions.

Today, we’re proud to announce our newest round of grantees:

In Tanzania and Mozambique, a grant to TRAFFIC will enable them to conduct an in-depth investigation into the trade in lion body parts. Over recent years there has been a marked spike in targeted poaching of lions for their body parts. However, little is currently known about the trade—the source of the demand, the trade routes, the types of body parts most in demand, or the nature of the players involved in the trade. TRAFFIC has designed a study to improve understanding of these issues, as a precursor to more effective law enforcement. Tanzania is a key site because it holds Africa’s largest lion population. Mozambique also holds a significant number of lions, and is a country where targeted lion poaching is known to be severe.

In Botswana, the Wildlife Management Areas north of the Okavango Delta are key to lion conservation, because they house part of one of the continent’s largest populations and form a connectivity pathway with nearby Namibia and Angola. CLAWS works with communities in this region to tackle human-lion conflict and improve management of livestock, to ensure habitat does not become degraded for wildlife. Through this grant, CLAWS will assist with the collaring of lions to allow for a ‘virtual fence’—such that communities are warned when lions approach their livestock—and will train herders to improve the protection of livestock. These measures are likely to reduce depredation of livestock and thus retaliatory killing of lions by communities.

Zambia’s Luangwa Valley is an important stronghold for lions. However, the species is threatened by a diverse range of threats; most notably depletion of prey as a result of snaring. In addition, human-lion conflict has become an increasing problem due to an incursion of livestock into the game management areas. With the LRF grant, Zambia Carnivore Programme (ZCP) and Conservation South Luangwa (CSL) will work together to tackle the twin threats of snaring and human-lion conflict in the valley. To tackle snaring, they are doing anti-poaching patrols and targeted protection of the 600-strong buffalo herd that occurs in their area. To tackle human-lion conflict, they are conducting outreach and education programs to improve livestock husbandry—such as an early warning system to allow for notification of herders when lions approach their livestock, strengthening of livestock corrals, fencing of villages to prevent both human-lion and human-elephant conflict, and the development of a set of protocols for responding to human-lion conflict incidences.

Zimbabwe contains a relatively healthy population of lions. However, there are a number of protected areas in the country which have become gradually depleted of wildlife over recent years, due to the acute funding shortages arising from the economic crisis that has affected the country. Significant potential exists for recovering lion numbers in these areas, and nowhere more so than in Chizarira National Park and Chirisa Safari Area in the north of the country. LRF has supported a process of conservation planning for these two areas involving the wildlife authority and other key stakeholders such as communities and NGOs. This will result in a coordinated plan for rehabilitation of these areas via partnerships between Zimbabwe’s national parks and conservation NGOs.

Malawi is a country where until recently lions risked going extinct. During 2017, the LRF provided support for the reintroduction of lions into Liwonde and Majete national parks. The future is thus brighter for the species, but significant threats remain. Lions in Malawi are threatened by severe poaching of their prey for bushmeat. There is also a lack of tolerance for lions among local people, which stifles prospects for natural re-colonization of protected areas from populations in neighboring countries. Lilongwe Wildlife Trust has been awarded a grant to embark upon a social and behavioral change communications campaign. This campaign will work to re-frame the lion as a national treasure and asset for Malawi, and to raise awareness about the threats posed to Malawi’s lions and the nation’s tourism industry via the trade in illegal bushmeat and trade in carnivore products. This campaign, it is hoped, will reduce demand for bushmeat sourced from poachers and for other wildlife products.

Chad’s Zakouma National Park is becoming an incredible story of recovery, thanks to the collaboration between the NGO African Parks  and the Chadian government. From a situation where poaching was rife and wildlife populations were declining steeply, the area is now secure with increasing wildlife populations. African Parks are in the process of planning a major geographic expansion in their support for wildlife protection and management. LRF is enabling a major survey of lions and prey species. This survey has the dual purpose of guiding African Parks’ future management and protection efforts – such that they focus in the areas where the largest remaining wildlife populations persist. In addition, the results will be used to encourage the Chadian government to elevate the legal status of the areas of land with the largest remaining wildlife populations. African Parks’ proposed expansion of 16,778 square miles includes vast swathes of land where lions are considered ‘possibly extinct’ – and provides hope for creating a major stronghold for the species in Central Africa.