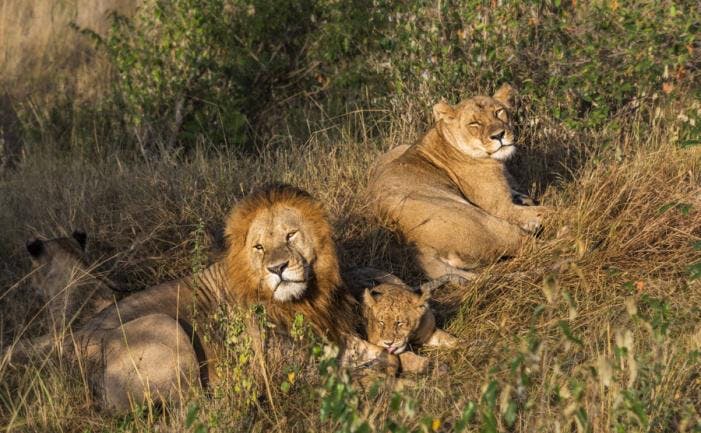 Africa’s lions are in a quiet yet violent crisis. Few people realize it, but we have lost half of lions the past 25 years, and there are fewer lions in Africa than there are elephants, or even rhinos. Africa’s human population will double by 2050, meaning loss of wild habitat, huge impacts by people on lion prey, and massive conflict between lions and humans who struggle to live alongside them.

Though we have lost half of lions the past quarter century, there is hope, and it’s right under our feet. Recent research makes it clear: the highest return on investment to recover lions is to better manage existing reserves and their surrounding lands. In other words, we must protect the core areas and work with the communities in, around, and between them to bring lions back, and turn these protected landscapes into lionscapes.

Protected areas are indeed critical for lion recovery. In a paper published this week, Dr. Peter Lindsey, WCN’s Director of Conservation Initiatives and a research associate of Panthera, and colleagues examined in detail the issue of lion conservation in Africa’s protected areas.

The paper highlights how Africa has set aside ample land to enable lions to be conserved in sufficient numbers. In fact, if invested in sufficiently and managed effectively, Africa’s protected areas could support a population of lions of over 80,000 individuals—or 3-4x the current population. Several African governments have allocated vast swathes of land for conservation, and many have shown a firm political commitment to protecting these lands for their natural heritage, cultural heritage and for their economies. These lands are unfortunately, rarely resourced adequately or managed effectively for lions and all the biodiversity they represent as umbrella species.

Lindsey and colleagues highlight that lions are way below carrying capacity in parks.  In the large majority of protected areas, they occur at less than half the numbers that they could reach with adequate funding and management. The main threats to lions in Africa’s protected areas include the poaching of their prey for bushmeat, conflicts with farmers, and encroachment by people and their livestock into protected areas. The targeted poaching of lions for body-parts such as bones for ‘tiger’ bone wine in the Far East, and claws and teeth for local cultural and ceremonial use is a lesser but emerging threat.

These threats underline how critical it is to manage the core reserves while ensuring that humans and lions can coexist on the larger landscape.  The actions of many conservationists to reduce human – lion conflict such as that by WCN partner Ewaso Lions have helped lions hold the line against these threats. These actions around and between Africa’s protected areas are essential. Yet this research shows that to recover lions lost, we must simultaneously take care of the beating heart of lion conservation – the protected areas themselves – something that is at the heart of the efforts of the WCN partner, the Niassa Lion Project.

Africa’s protected areas and the amazing diversity of wildlife that they host are a global asset and the source of wonder for hundreds of millions of people worldwide. The onus is on the global community to step up and elevate the funding that is needed to make Africa’s magnificent parks fulfill their full potential. The benefits could be priceless: major increases in lions, elephants, and other threatened species— but also benefits for humans as protected areas drive tourism economies in Africa, and provide essential ecosystem services such clean water for the growing populations of Africa.

Conserving these cores and supporting local communities to live with and thrive from wildlife is at the core of WCN’s conservation philosophy. Your continued support of our lion partners and lion recovery efforts will give the king of beasts back his throne on Africa’s savannahs once again.