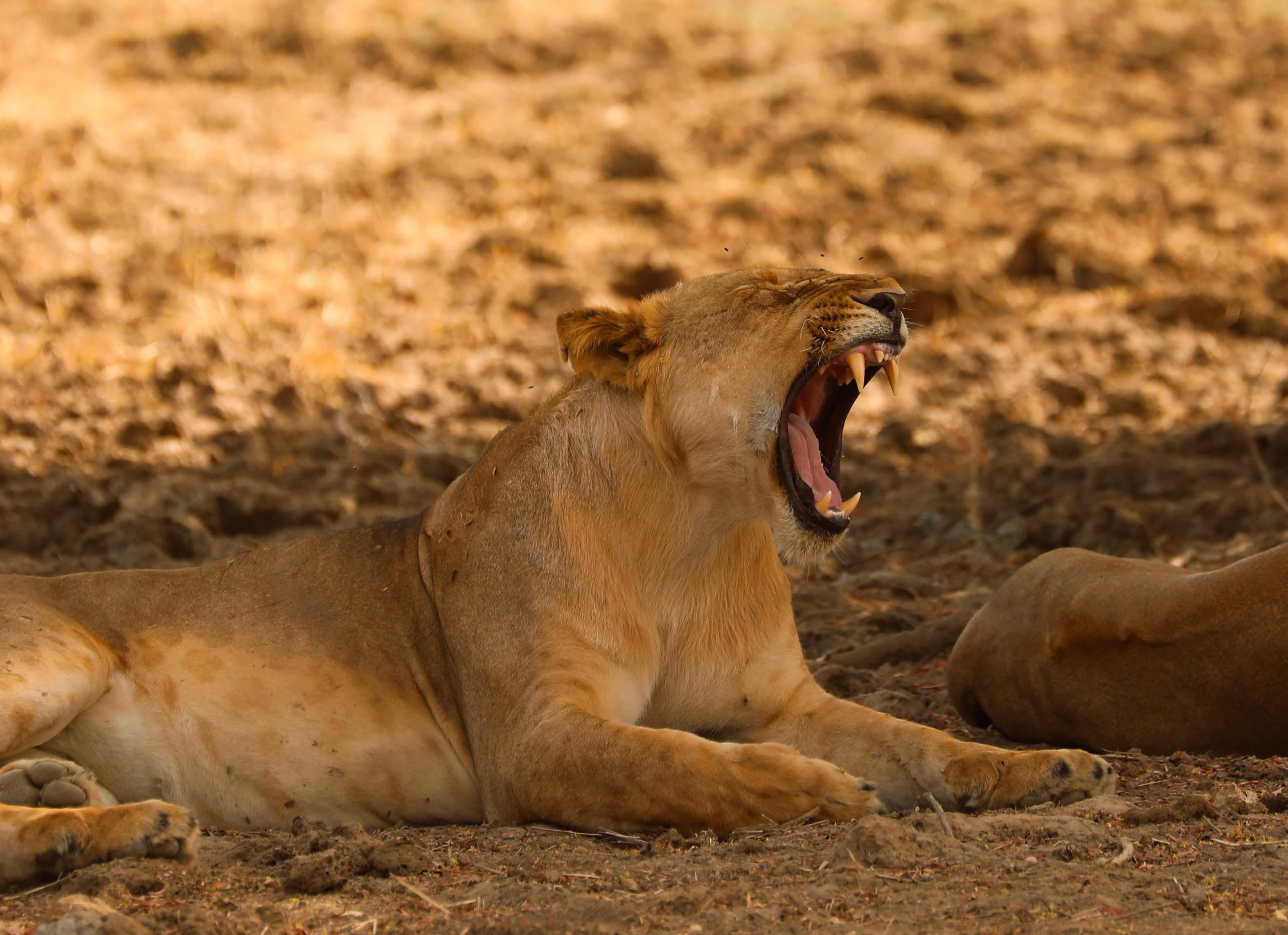 In early March 2020, I traveled to Chad to visit the work that African Parks (AP) is undertaking in partnership with the Chadian Government. The Lion Recovery Fund (LRF) has invested heavily in AP’s work in Chad, so I wanted to see that work myself to understand their local conservation issues and assess their needs going forward. Site visits such as this are a key part of my role as Director of the LRF.

I was a little nervous heading out to Chad because, although only a few cases of coronavirus had been recorded in Africa at that time (and none in either my home country of Zimbabwe or Chad), the world was beginning to panic. I worried that I might get stuck somewhere on my journey home. Landing in N’djamena, I was immediately struck by the 110-degree heat. March is late dry season in the Sahel and temperatures are high, sometimes creeping over 120 degrees in Zakouma by the end of the month.

Traveling with a colleague from AP, we rushed through the immigration and customs formalities and caught a small plane out to the bush. What followed was one of the most inspiring conservation experiences I have ever had.

Zakouma National Park is one of Africa’s brightest conservation success stories. While wildlife in many parts of Central Africa is in terminal decline, Zakouma is a beacon of hope. This was not always the case. Between 2002-2010, poachers rampaged through the park, slaughtering 4,000 elephants at a rate of 500 each year. The major threat came from heavily armed horsemen from Darfur in Sudan, the Janjaweed, who would sweep through the park and decimate wildlife. By 2010, a traumatized population of 454 elephants remained (down from an estimated 22,000 in the 1970s). That year, African Parks and the Chadian Government established a management partnership for the park. This resulted in an immediate injection of expertise and funding to the area, allowing for a major upscaling of both anti-poaching efforts and engagement of the local community.

Poaching was rapidly brought under control and since then, an average of just two elephants per year have been poached, with none at all killed in the last 18 months. A key step in securing the park was developing a network of airstrips within it, making the entire park accessible even during the rainy season when the area becomes waterlogged. Prior to that, poachers would attack when rangers were not able to reach remote parts of the park due to the impassable mud. The elephants, previously traumatized, are now calm and have started to recover in number. The latest estimates suggest a population of around 600 individuals reside in the park. Another key factor has been AP’s success at developing strong relations with local communities. The park and the communities share a common threat in the form of the Janjaweed horsemen coming from Sudan. AP has significantly improved security for local people, who in turn readily support the park on information regarding the movement of poachers in the ecosystem.

Other species have also made steady recoveries. The area now holds 1,200 Kordofan giraffes, which is 60% of the world’s remaining population. Recent research by the Giraffe Conservation Foundation suggests that there may be five different species of giraffe, of which the Northern giraffe (which includes the Kordofan sub-species) is the second rarest, with just 5,600 individuals remaining.

The park is home to a staggering diversity and abundance of waterfowl. The reason for this is that the area retains large wetlands even during the driest time of the year.

The park also holds an enormous population of buffalo (12,500 individuals), and significant numbers of roan antelope, bohor reedbuck, kob, defassa waterbuck, lelwel hartebeest, and tiang, among many other species.

There are approximately 130 lions in Zakouma though for some reason, their numbers have not increased despite rapid increases in numbers of their favorite prey. Several theories exist as to why this may be. Conditions in the park vary massively with season – during the rainy season the park floods, whereas during the dry season, water is limited to the series of pans in the East of the park. When the park floods, much of the wildlife leaves the park and it is possible that the lions are persecuted by livestock owners during this time. Another theory is that during the driest time of the year, the lions become so concentrated around the remaining water that some competitive mechanisms limit their numbers. Another theory is that the very high density of baboons results in high levels of lion cub mortality. In some instances in Zakouma, baboons have been observed killing lion cubs left stashed in hiding places by their mothers. The LRF has provided AP with funds to study the lions to understand what is limiting growth of the population. If the factor is human in nature, AP can adapt their management strategy to tackle the threat.

In spite of the limiting factors for lions in Zakouma itself, there is exciting potential for lion recovery in the wider ecosystem. AP and the Chadian government recently signed a deal for the expansion of AP’s mandate to include an additional 11,583 square miles – an area over three times larger than Yellowstone National Park. This area includes a matrix of different protected and unprotected lands. AP are working with the Chadian government to increase the protection status of key portions of this land, and once that is achieved, their wish is to undertake large-scale wildlife reintroductions to re-stock depleted areas. Across this area, one can reasonably expect lion numbers to eventually number several hundred. To help with this expansion, the LRF provided AP with a grant to conduct surveys to identify the core wildlife areas on which to focus the expansion of their management and with which to make the case for an elevation of protection status.

My journey home from Zakouma was somewhat anxious. The coronavirus pandemic had sparked panic around the world and my flight out of the park was delayed by the dusty Harmattan winds from the Sahara, rendering visibility too poor to fly. Though punctuated by worry about getting stuck in transit in N'djamena or Addis Ababa, I flew home invigorated from witnessing a truly amazing wildlife spectacle. Zakouma National Park is one of Africa’s most striking conservation success stories. Major credit is due to both the Chadian Government and African Parks.

Since returning to Zimbabwe, I heard the tragic news of 92 Chadian soldiers being killed by Boko Haram close to the Cameroonian border (thankfully far from Zakouma). This kind of instability emphasizes the complexity of conservation efforts in the Sahel and shows that we cannot take the successes in Chad for granted. We need to find ways to increase and sustain support for conservation efforts in West and Central Africa, such as those undertaken by African Parks.